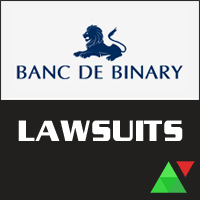 2016 was not a very good year for Banc De Binary. The broker came under scrutiny from two major regulatory bodies, and the processes that the ensued resulted in hefty fines for this company and tarnished its reputation significantly. Eventually, this led to the broker’s downfall, so we decided to investigate what really happened with one of the strongest brands of the binary options industry. We want to see what the mistakes that resulted in these major Banc De Binary lawsuits were, so that you know what to avoid when examining a broker’s offer. Let’s get going.

The first of the Banc De Binary lawsuits that marked the decline of this huge company was the settlement with CySEC in January 2016. The fine was €350,000, and although not many details were published, the agency did state that the cause for the whole process was the possible violation of the Investment Services and Activities and Regulated Markets Law of 2007. A much bigger blow came only one month later, when the largest of Banc De Binary lawsuits also ended in a settlement, with the case lasting two years. However, this time Banc De Binary had to pay 11 million dollars. The company was charged with taking orders from US clients despite the fact that this kind of trading was banned in the country at the time.

Given these developments, 24option seems like the best broker to consider if you’re looking for a reliable trading partner. They are also one of the best companies in the business, with the same minimum deposit requirements and loads of interesting features, as seen in our 24option Review 2016.

But this story is not over yet because the most recent of the Banc De Binary lawsuits is just a few weeks old. It was learned that Giambrone, a London-based law firm, is initiating a class action lawsuit against the broker and all Banc De Binary affiliates. Numbers in this case go up to 5 million €, although nothing has been confirmed yet. Actually, the whole thing is far from over as the mode of financing the lawsuit is still being negotiated. Furthermore, the broker is about to shut down for good, following a series of Banc De Binary scam accusations from various media in Israel and the United Kingdom.

As you can see, 2016 was a turbulent year for this company and 2017 simply continued the trend with a new addition to the list of Banc De Binary lawsuits. All of that turned out to be too much for one of the most famous players in the binary options industry, and the company recently stopped accepting new clients and began the process of returning money to the old ones. With that, it seems that this whole industry is losing one of its strongest brands and entering a completely new era.

Hello! I’m Mark Watson, born and raised in Scranton, PA. I’ve been investing online ever since I started college at the University of Pennsylvania (go, Quakers!), where I was an undergraduate student of Economics. At first, I didn’t invest much, I was just hoping to get some extra pocket money, but with time I realized how math and patterns can actually be of great help in this line of work.
After a few years, I moved to London School of Business and Finance to continue pursuing my career in investing, and I eventually landed a job at Credit Bank Europe. The experience I got there was invaluable, plus it assured me that online trading was something I want to do for a living. Sure enough, I became a trading manager in 2015 with FXVC Online Trading, but a little while later I started working on my biggest project so far – BinaryOptionsTrading-Review.com.
The website is still going strong, and we have analyzed hundreds of brokers from all trading fields so far and helped hundreds of readers make the right choice. We also publish trading signals on a regular basis, which have proven to be accurate about 80% of the time!
And since the online trading industry is only growing, with cryptocurrencies and other similar products entering the fray, I am incredibly excited about what the next few years have in store for us. In short, if you want advice from a passionate trader, you’ve come to the right place!