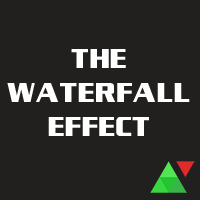 Analysis is the most important thing you have to do before you open your trades. If you dedicate enough time and effort to it, your chances for success grow a lot. However, performing an analysis is not always easy. There are situations where a lot of skill and knowledge is required to extract useful information from the market’s behaviour. The waterfall effect is one such situation and we are going to show you some basics of using it in the following paragraphs. Be advised, this topic is meant for skilled traders, so if you’re still new to this business, we recommend you start with something easier. But if you think you can handle it, read on!

The Waterfall Effect | What is it?

The waterfall effect belongs to the category of technical analysis and is considered to be a very complex pattern. Its main distinguishing feature is the fact that it is formed of corrective patterns and corrective patterns alone. Another characteristic of the waterfall effect is that it usually ends with a Corrective Wave in form of a triangle, which signals the time to start buying call options. Keep in mind that we are talking about bearish patterns here. After all, it is called the waterFALL effect, implying that the price is always travelling downwards. It should also be mentioned that this effect usually shows up when a zigzag pattern appears three times, so keep your eyes open when examining your chart.

The Waterfall Effect | When does it appear?

But the waterfall effect comes in a variety of different forms. It itself can represent a leg of a triangle (a contracting one), which will then be followed by another correction, only this time the correction will go in the other direction. Less common cases of this effect include appearing in an impulsive move in the place of the second wave or as the final, fifth part. The latter case, however, is only apparent when every part of the move is corrective and a combination appears three times. In most cases, though, you will not see the waterfall effect in an impulsive move. As you can see, there are many variations of this pattern and, consequently, there is a lot to learn. So prepare yourself thoroughly if you want to have success with this type of analysis.

The waterfall effect is a fairly complex issue, so new traders should probably focus on something more basic when trying to improve their skills. It can appear in many different ways, so there is a lot to learn about it before you are fully prepared to take it on in real trading. We hope we have given you a push in the right direction with this article and clarified what you need to look out for. Spend some time on education and it will surely pay off, since you will have another powerful analytical tool at your disposal. Good luck!

Author's overall rating:
Author: Ben Prescott
Updated: March 1, 2019
RISK DISCLAIMERBinaryOptionsTrading-Review.com has taken reasonable measures to ensure the accuracy of the information in the website, however, does not guarantee it. The data exhibited in this website is not necessarily always real-time or completely accurate; this includes market analysis, forecasts, signals, assets’ price quotes and charts. Readers should not treat any opinion expressed by the authors of BinaryOptionsTrading-Review.com as a specific inducement to make a particular trade or follow a particular strategy, but only as an expression of their current opinion. The risks involved in trading binary options are high and may not be suitable for all traders. BinaryOptionsTrading-Review.com doesn't retain responsibility for any losses readers might face as a result of using the information presented in this website. This website is owned by Next Media Corp. In accordance with FTC guidelines, BinaryOptionsTrading-Review.com has financial relationships with some of the products and services mentioned on this website. BinaryOptionsTrading-Review.com may be compensated if consumers choose to click links in our content and ultimately sign up for mentioned products. Binary options are not promoted or sold to retail EEA traders. If you are not a professional client, please leave this page.
Copyright © 2020 Binary Options Trading Review.
This site uses cookies in order to provide you with the best experience regarding personalized adds, as well as to improve our services. These small text files are used to capture your usage of our site and are stored locally on your device. They provide no harm to you and, by continuing, we take that you accept them. To learn more about cookies and how we handle them, please refer to our Cookie Policy page.OK, thanks!Read more